My 5 Favorite things about Legoland 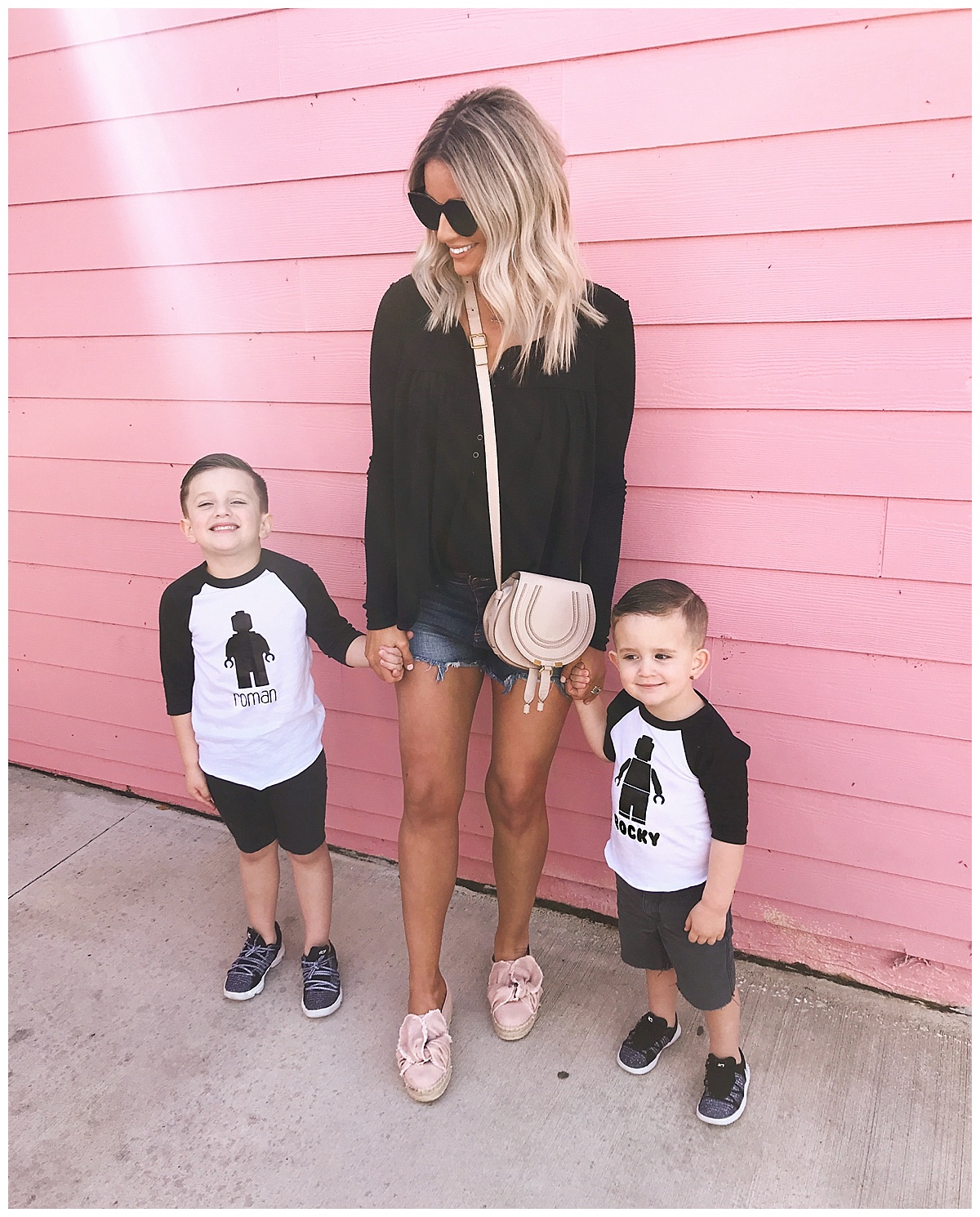 Hey Gang! I’m so excited for today’s post because I’m sharing some more info about our recent trip to Legoland! We had such a good time and looking at all of these pictures makes me want to go back all over again. 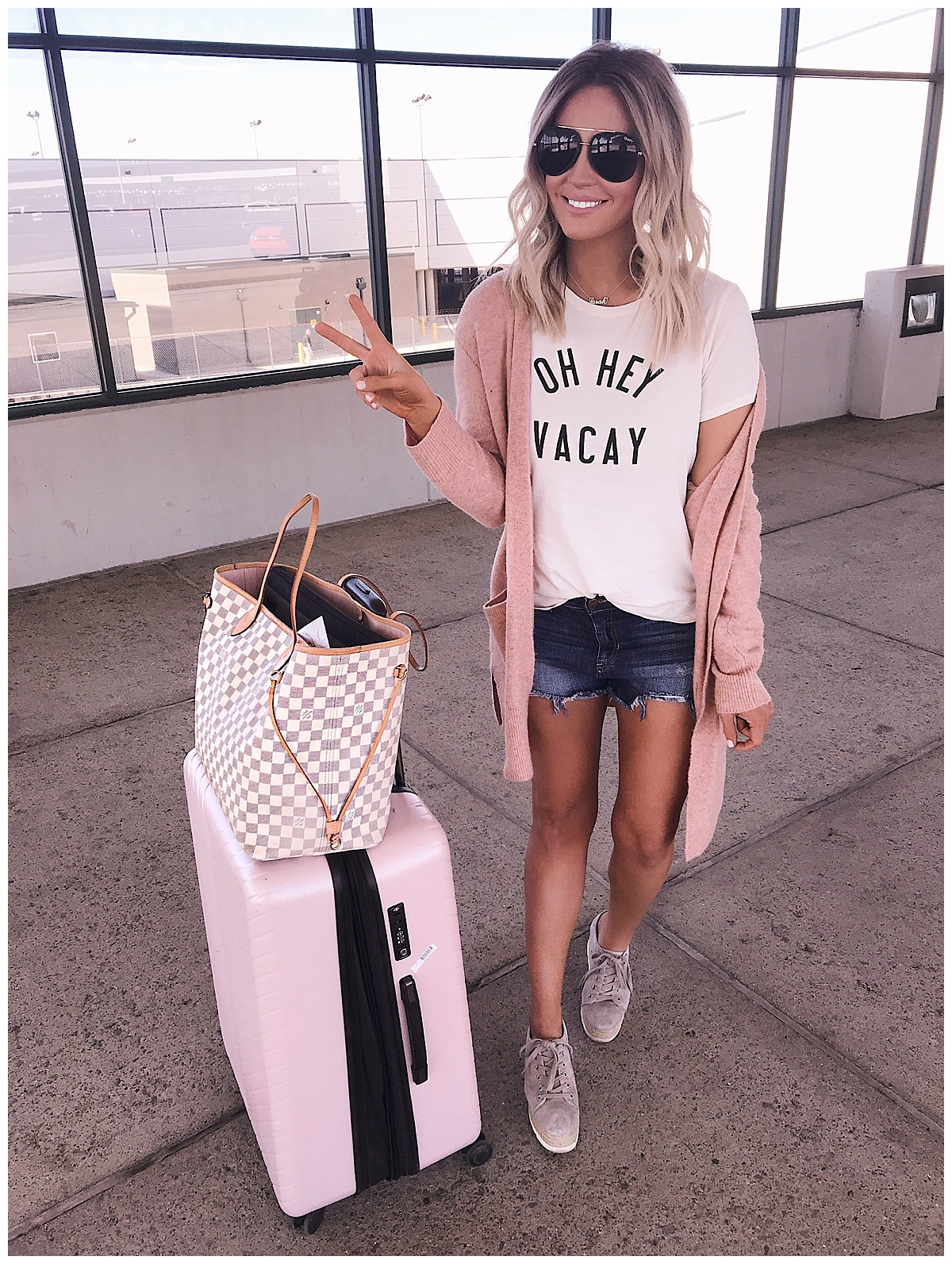 Thanks to YouTube, Roman first heard about Legoland about year ago. He loves to watch this “Youtuber Kid” open legos and play with them and on one of his episodes last year, this kid went to Legoland. Ever since then Roman had been dreaming of going and reminded me pretty much weekly that he “just couldn’t stop thinking about Legoland.” Rocky hopped on the bandwagon too and both of them were over the moon excited (understatement) when I told them we were going last Month. 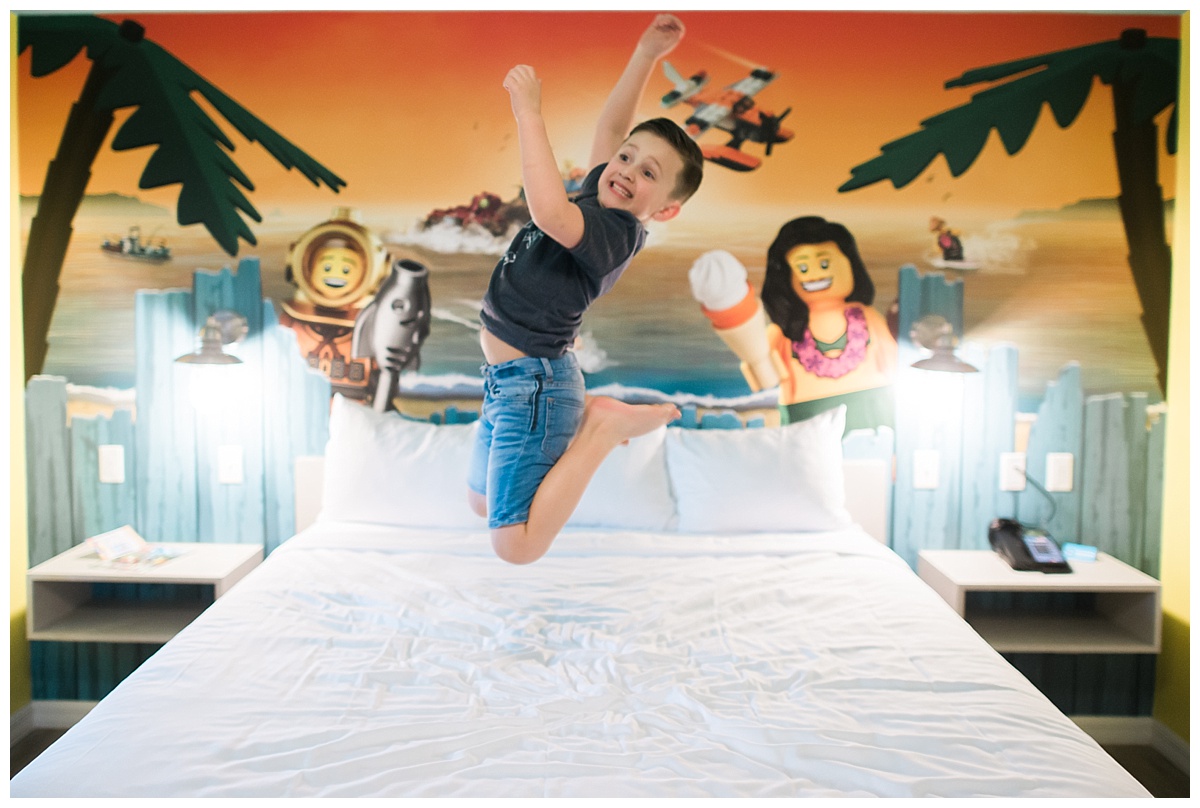 I have to be honest, I really didn’t know much about Legoland when I started planning the trip, other than it’s THE GREATEST PLACE IN THE WORLD (per Roman). Today I thought I’d share with you my five favorite things about Legoland, and if you’re planning a trip there, hopefully this will help! 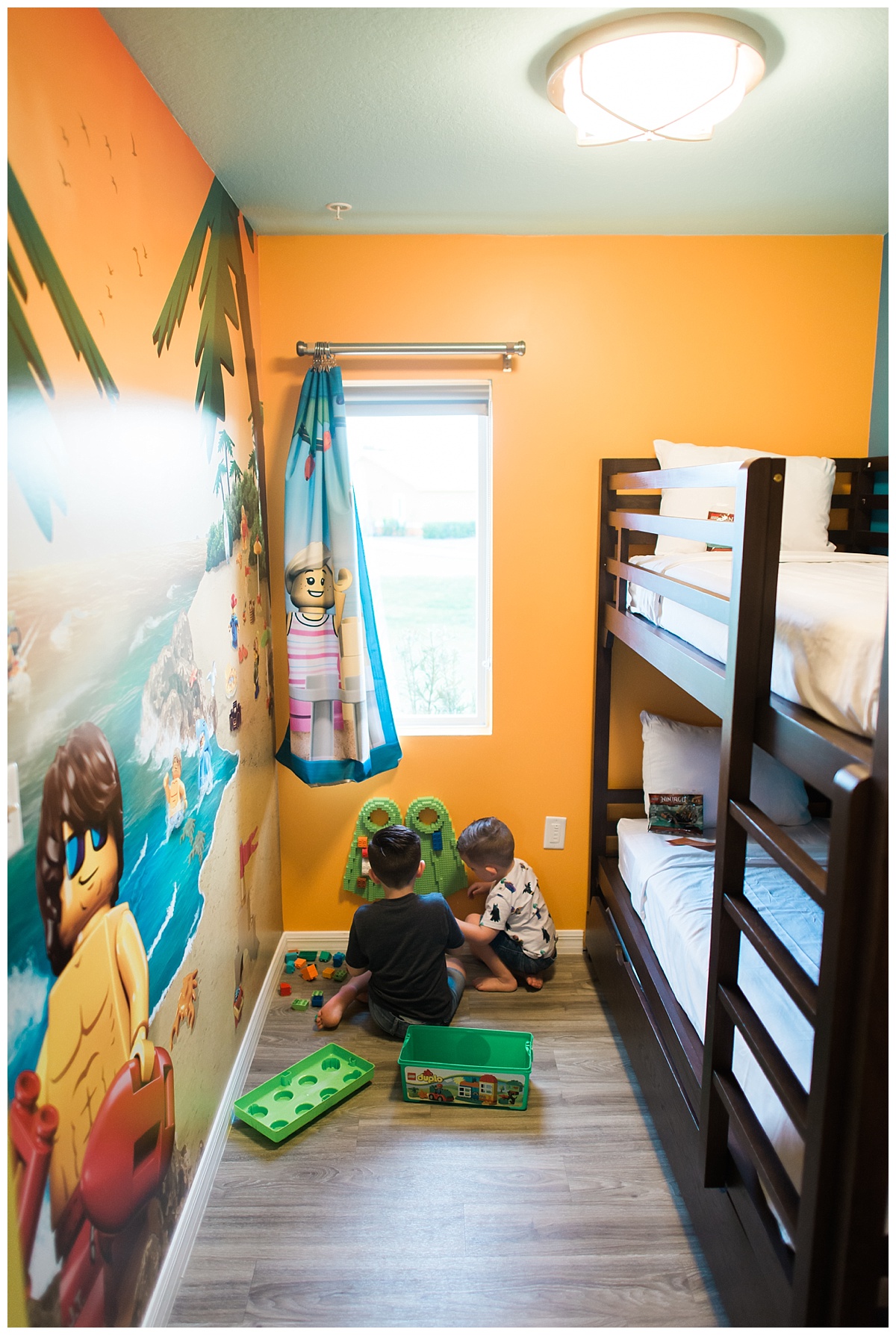 So there’s two different Lego Hotels. The first one (I’m guessing the original) is right beside the entrance to the Legoland Park. I mean right beside it. If you stayed at that one, you wouldn’t even need to drive to the park. You literally just walk out the front door of your hotel and you’re at the park entrance. Can’t really beat that.

We stayed at the new Lego Beach Resort, which is right across the street from the park entrance. Even though it sounds close, it’s too far to just walk to the park. Luckily, they have free shuttles that you can ride to and from Legoland, or you can drive your car and park for free! Staying at the hotel was almost worth it just for the parking benefit. Not only is it free, but they have a special section for Hotel guests, so we got to park right next to the entrance and it’s under a shaded pavilion (key for Florida).

Even though we stayed at the Beach Resort, they told us when we checked in that we were able to hang out at the other Lego hotel too. We didn’t have time, but apparently no matter which hotel you stay at, you can visit the other one, swim in their pool etc…

Our hotel had free breakfast every morning too. It was so nice to be able to just walk to breakfast in the morning and fill up (for free) before heading into the park.

It was so easy to get pictures with the characters at the hotel too.

They give all the kids a free pack of legos! Both boys had a little gift waiting for them on their beds when we got there! I heard other kids at the pool talking about what they got too. It was small, but the boys loved it and it was a fun way to welcome them to the hotel.

They have a great program of events in the evening for the kids. It started with this “lighting of the lighthouse” ceremony. I actually thought that part was pretty cheesy, but the boys loved it. They kept re-enacting it the rest of the week so what do I know? Haha! After that they had organized games, a dance party, s’mores by the fire and a bedtime story.

Kent asked me when I got there if the hotel was nice. It wasn’t especially “nice” in the fancy sense of the word, but it’s new, clean and for kids, it is a fantasy land…which brings me to my second favorite thing… 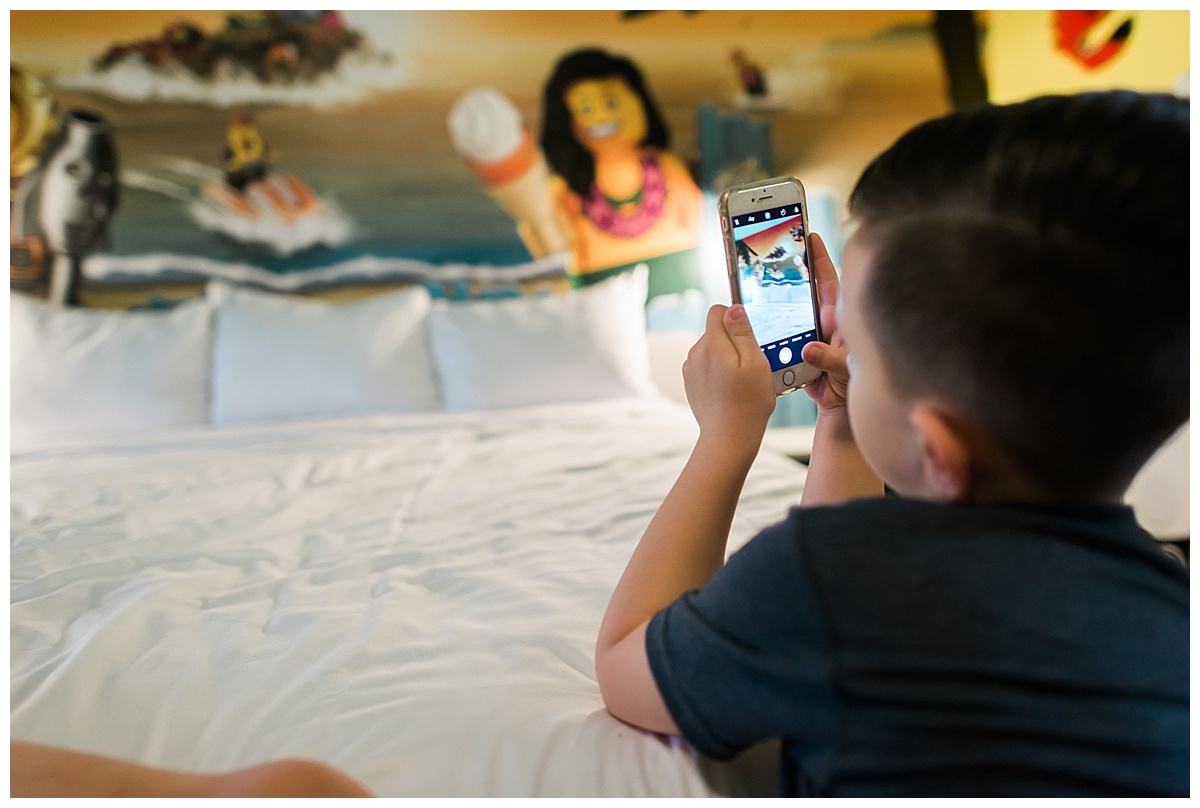 (taking pictures of the room for Daddy) 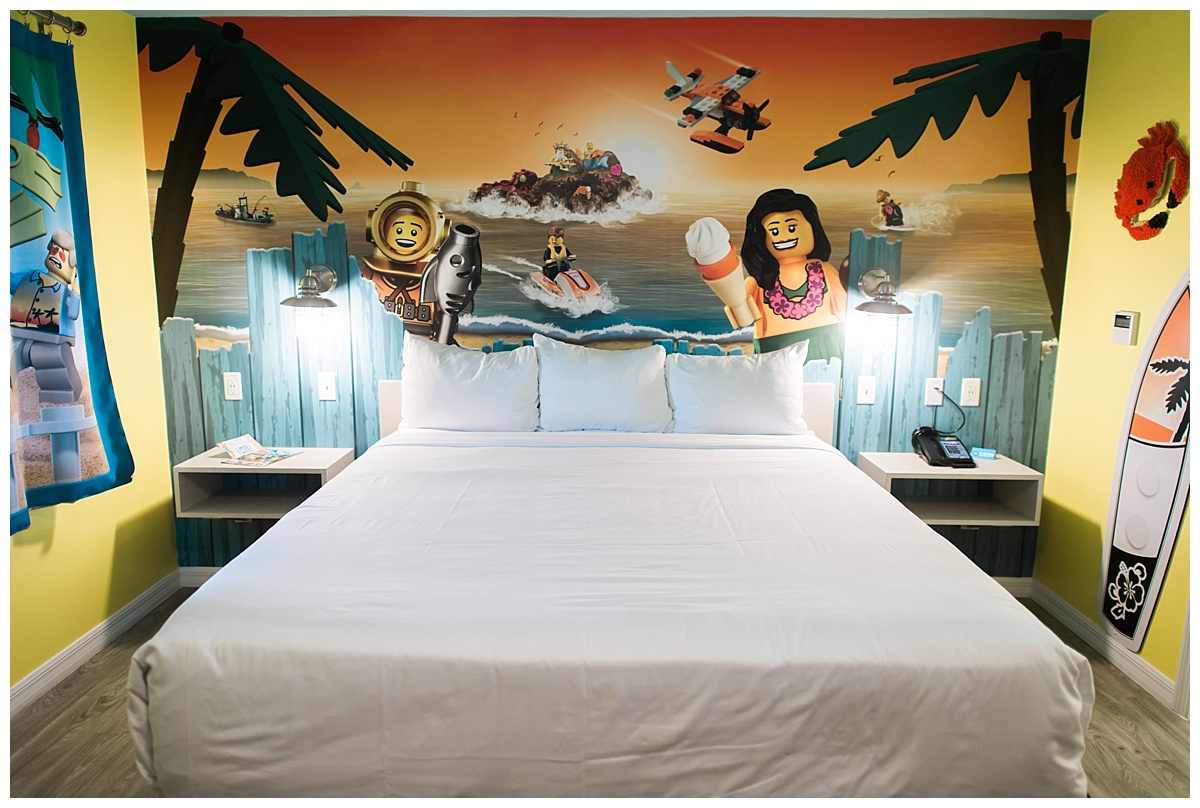 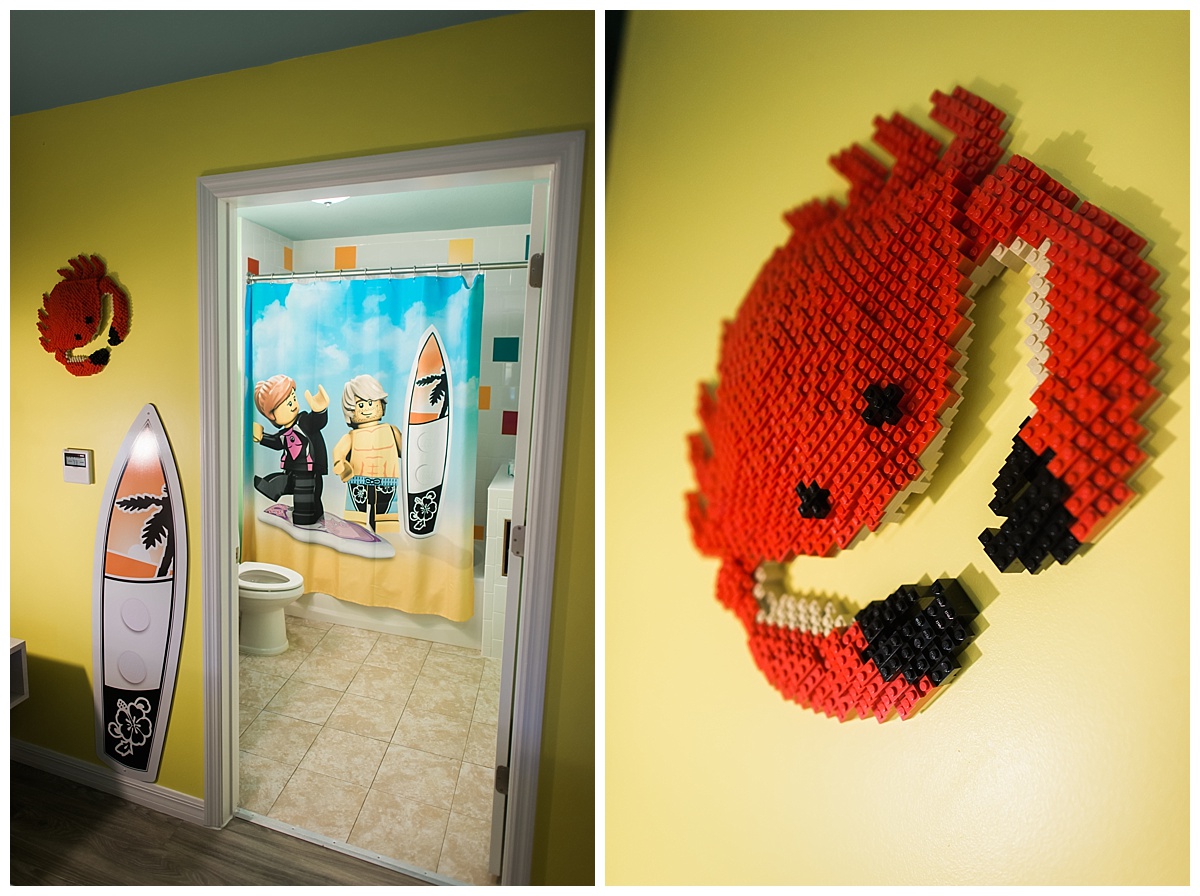 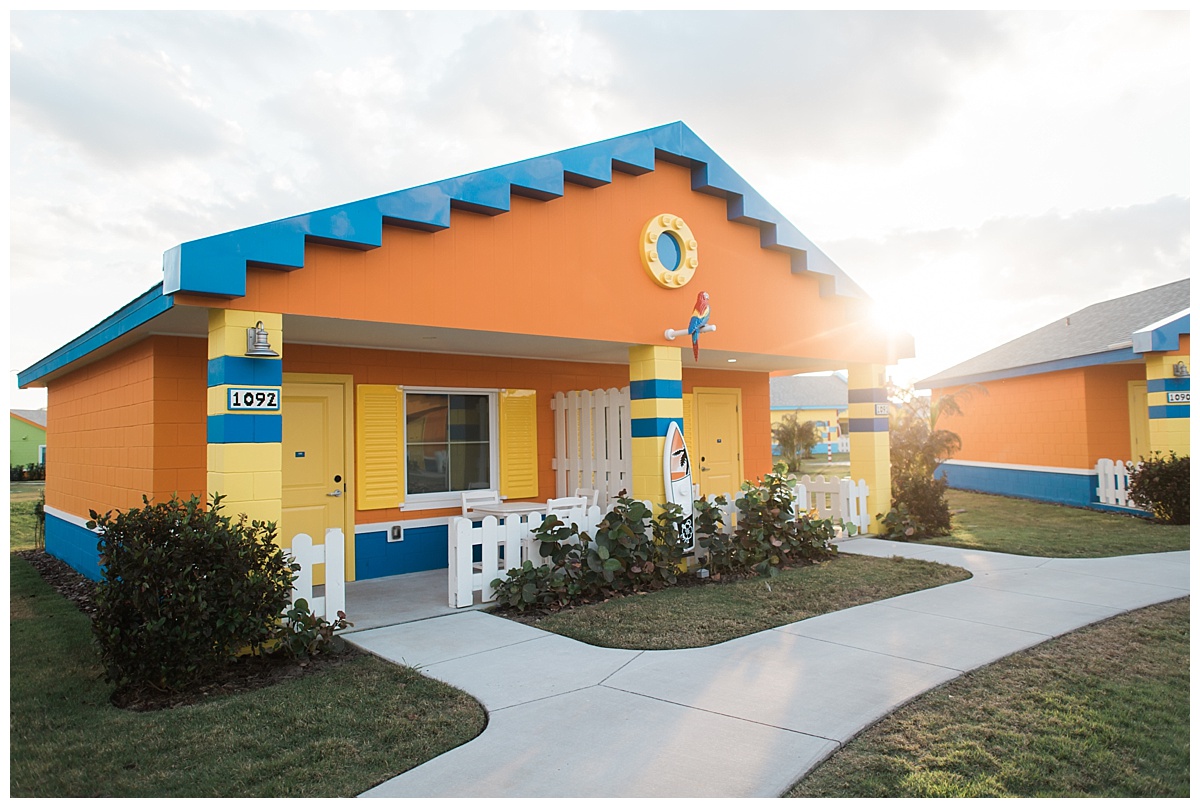 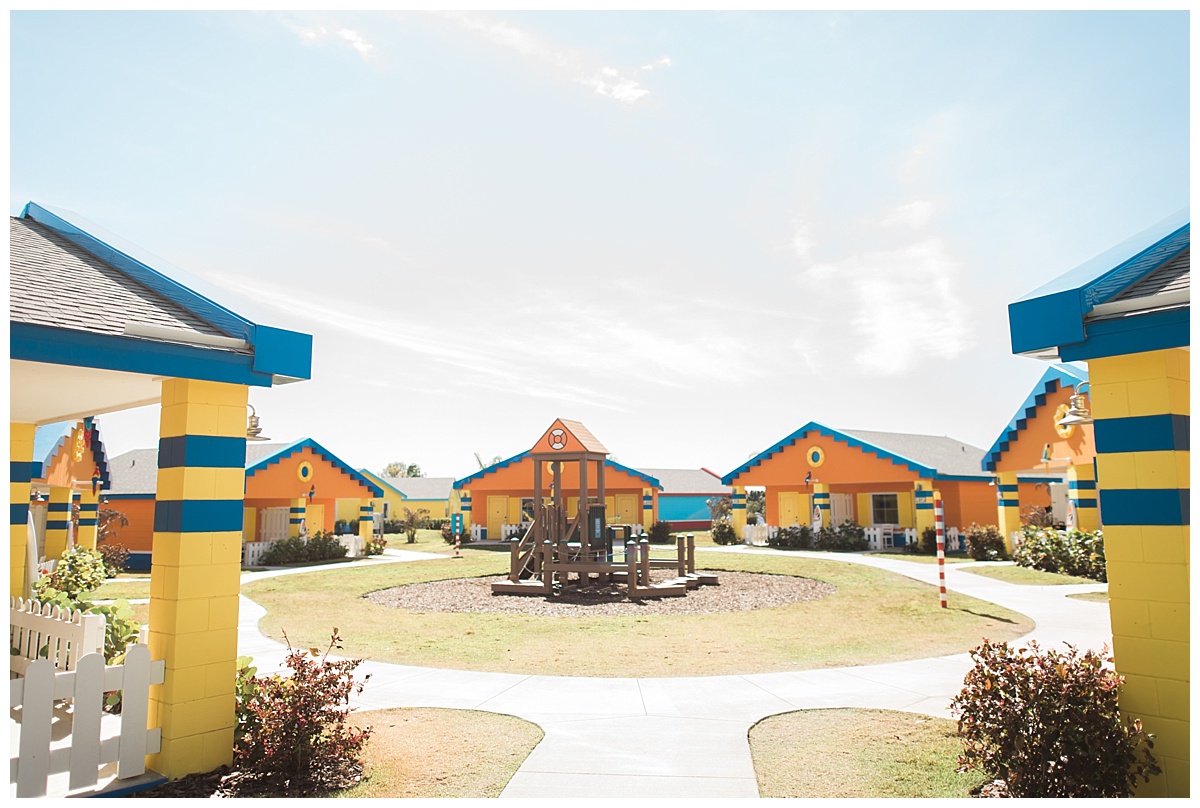 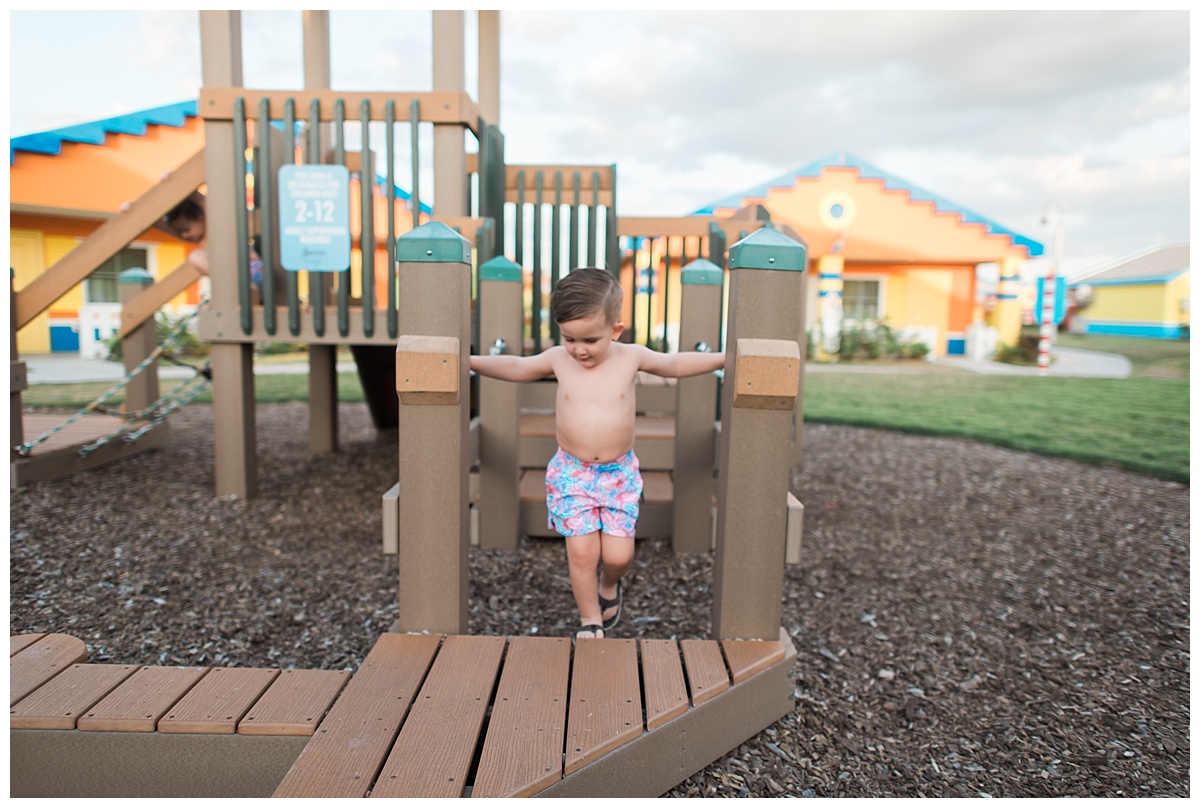 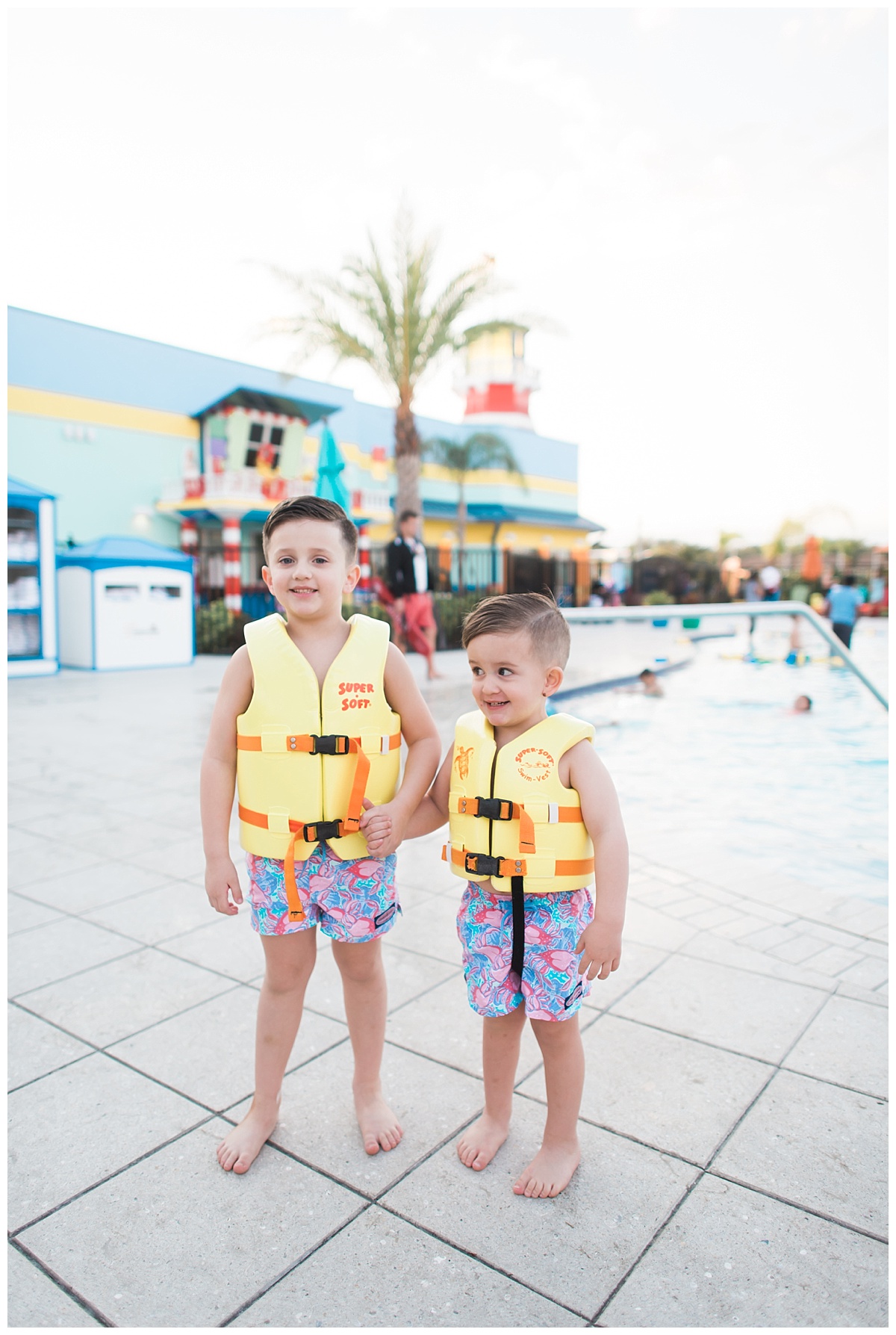 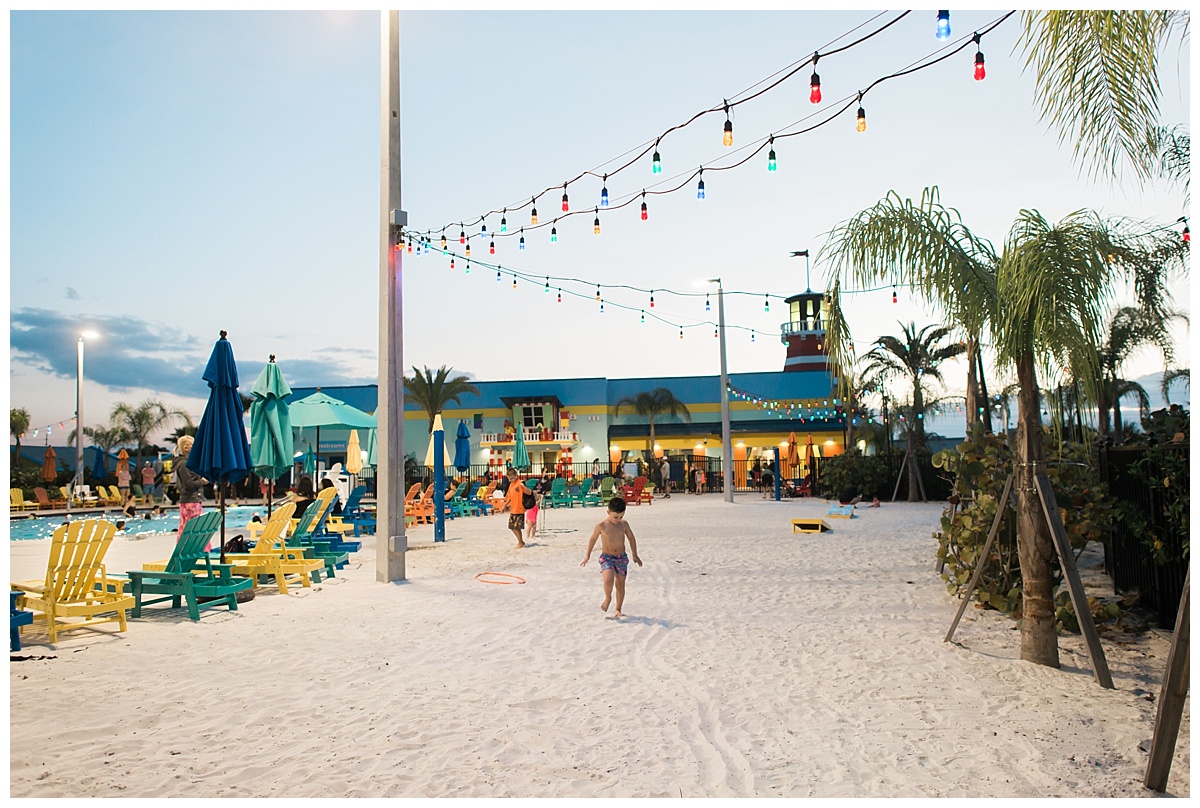 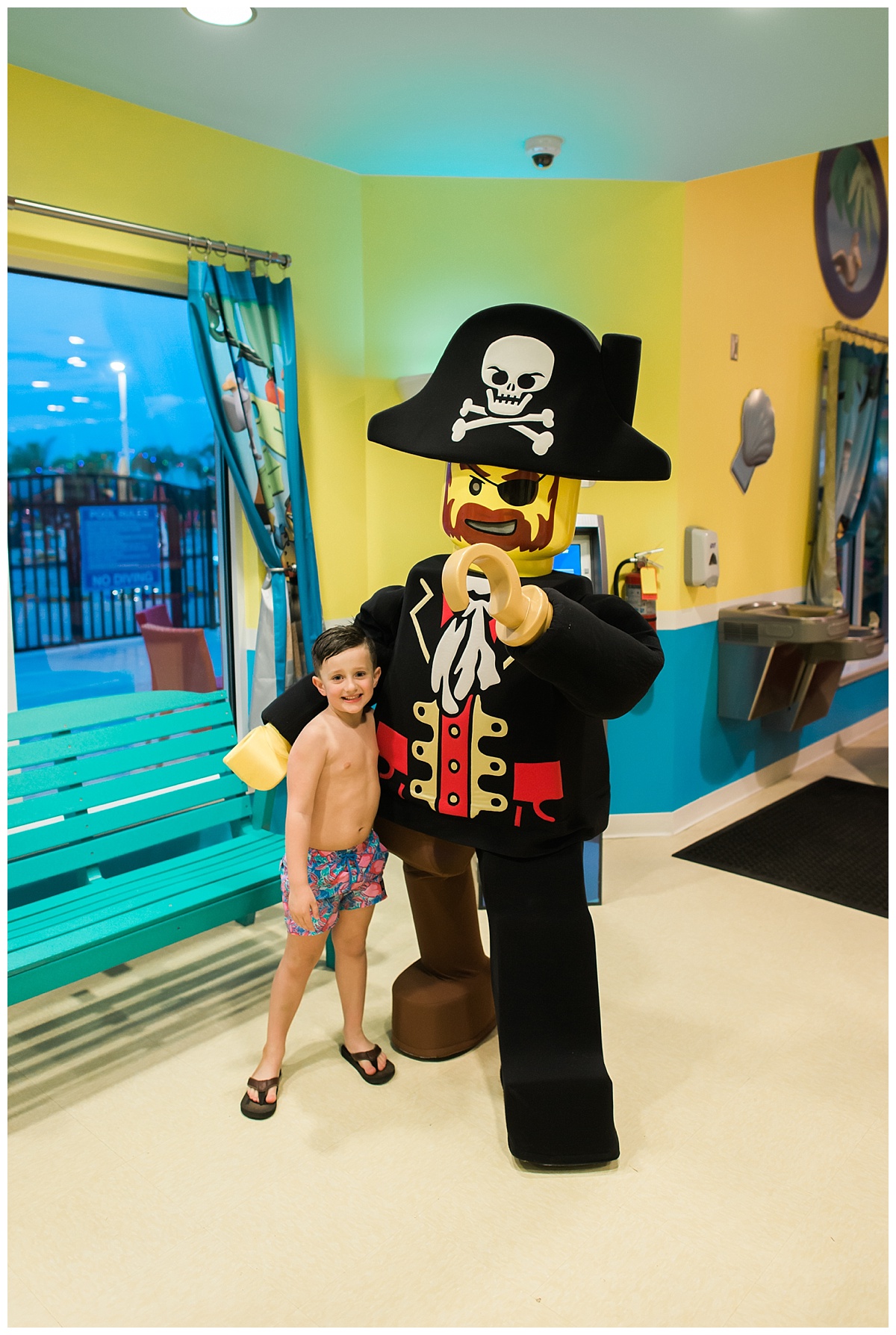 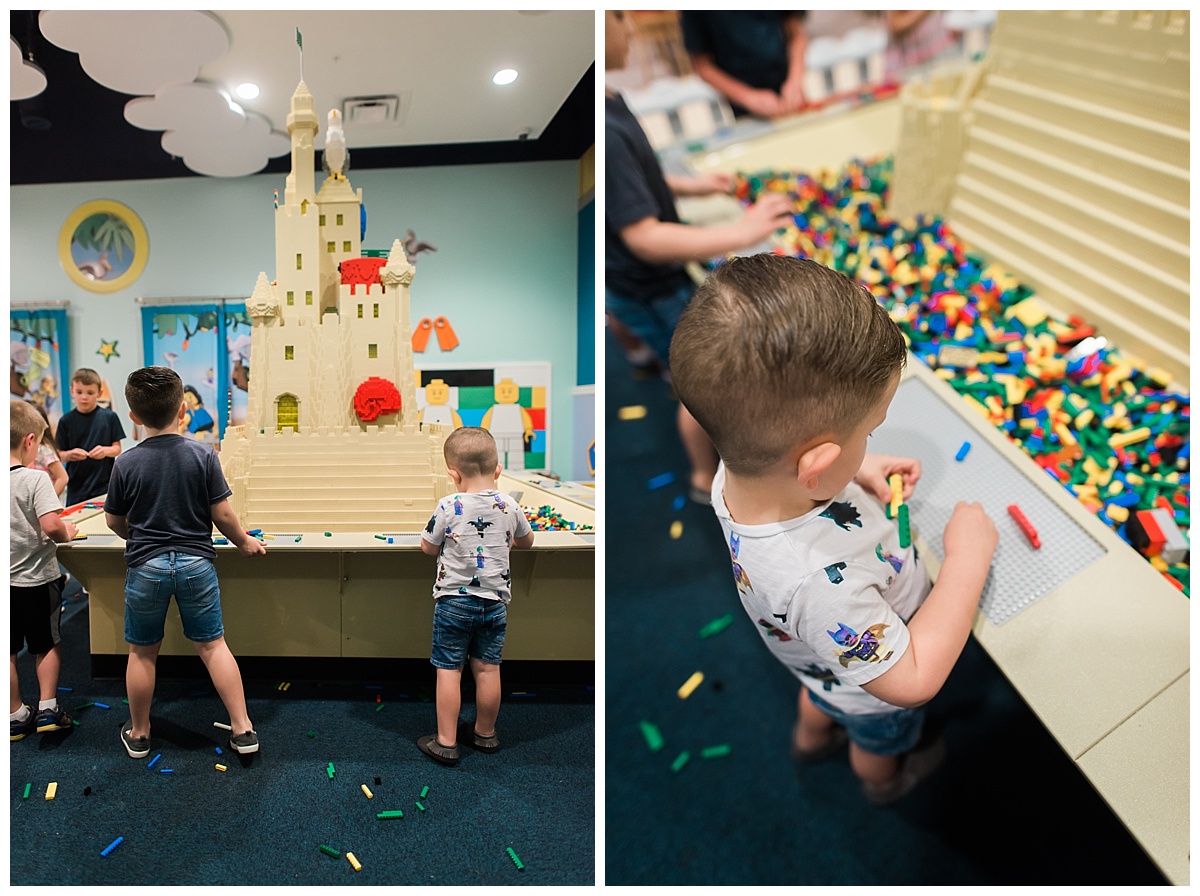 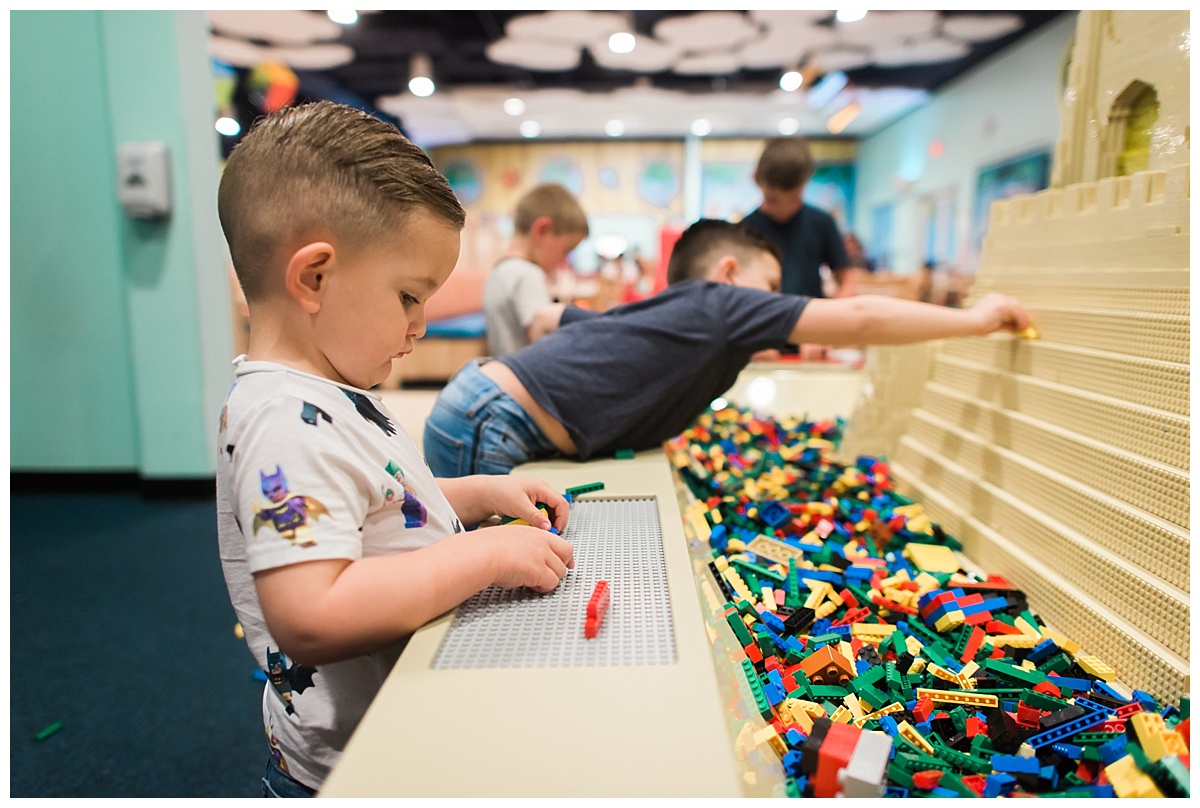 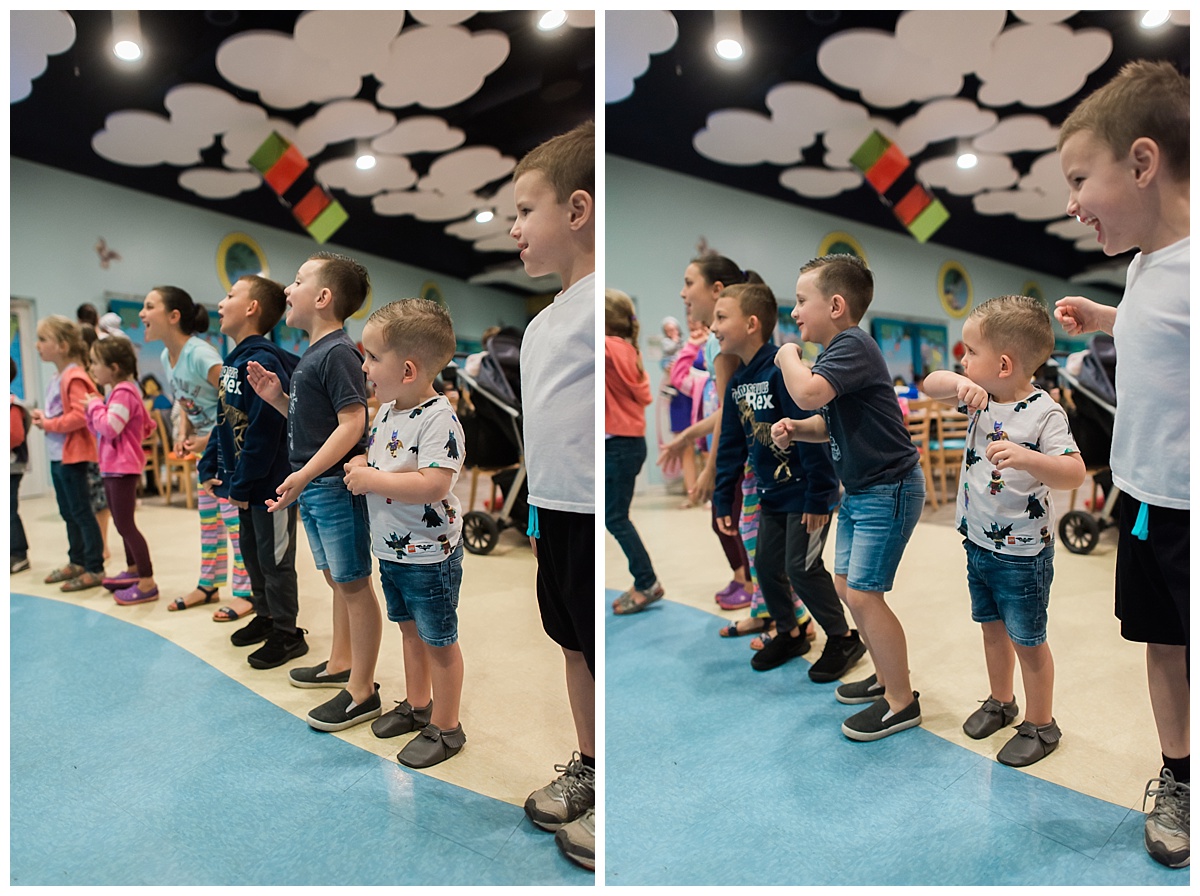 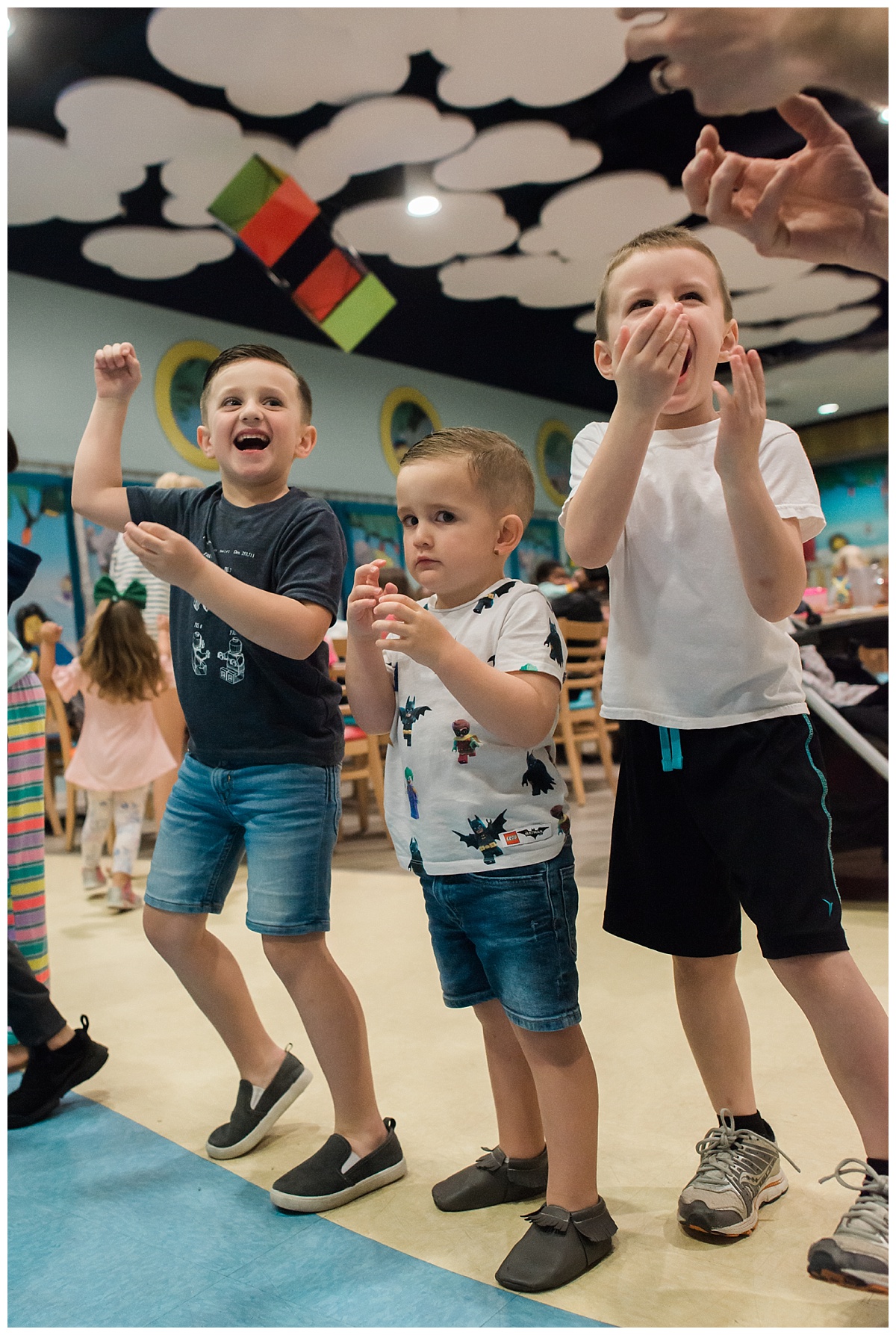 I really can’t stress this one enough. I was blown away by all the things Lego has implemented at both the hotel and the park that are just plain smart. They really have thought of so many ways to make it easier on parents and more enjoyable for kids.

For example, drive through hotel check-in. Genius right? Rocky was sleeping when we got there so it was amazing not to have to get everybody out of the car, go in, check in, come back out and move the car to where we need to park, then unload. We just pulled right up to the window, got all our info and a map there, and drove straight to our bungalow. So much easier! I seriously wish every hotel had this option.

They had things like Honest apple juice pouches in the room for us when we checked in, boxes of Legos on the floor and a Lego wall for the kids to play with. The bathroom even had a potty seat for little kids and a detachable shower handle so you could spray all the sand off your kids in the bathtub. There were games out on the lawn and lego tables for them to play with. The pool had one of those beach style entrances which is so nice with kids. Plus they had giant foam Legos in the pool for them to play with and free life vests for them to use (in all different sizes). They have a huge playground area by the pool, but then they also have small playgrounds all over the property beside the bungalows. So you can just sit on your little porch and watch your kids play. Or if they prefer to play alone, they can go find their own playground. The bungalows have bunkbeds, as well as a trundle bed that pulls out so you have room for three kids in each room. They’ve just thought of so many great ideas for people traveling with kids. I guess I should of called this one, the lack of lines. Because there weren’t any. Seriously. We visited the park on the second week of March, so I was a little worried that we’d be there during Spring Break and the lines might be crazy. Plus the day we went was 72 degrees and zero percent chance of rain so I just knew the park would be packed. There were definitely a lot of people there, but we rarely had to wait in line for anything! I’d say 80% of the rides we rode on had no line. We just walked right on. The other 20% we waited for maybe 5 minutes. We didn’t wait longer than 10 minutes for anything all day.

With two little kids, that’s pretty priceless to me. The boys just loved getting to run from ride to ride to ride without have to waste so much time just standing in line.

If you did have to wait in line, they have Lego play areas set up at each ride for the kids. So your kids can go play with the legos on the lego wall, while you hold their place in line (you can see them from where you’re waiting). I loved this idea! Such a smart way to make the time pass quicker for the kids. 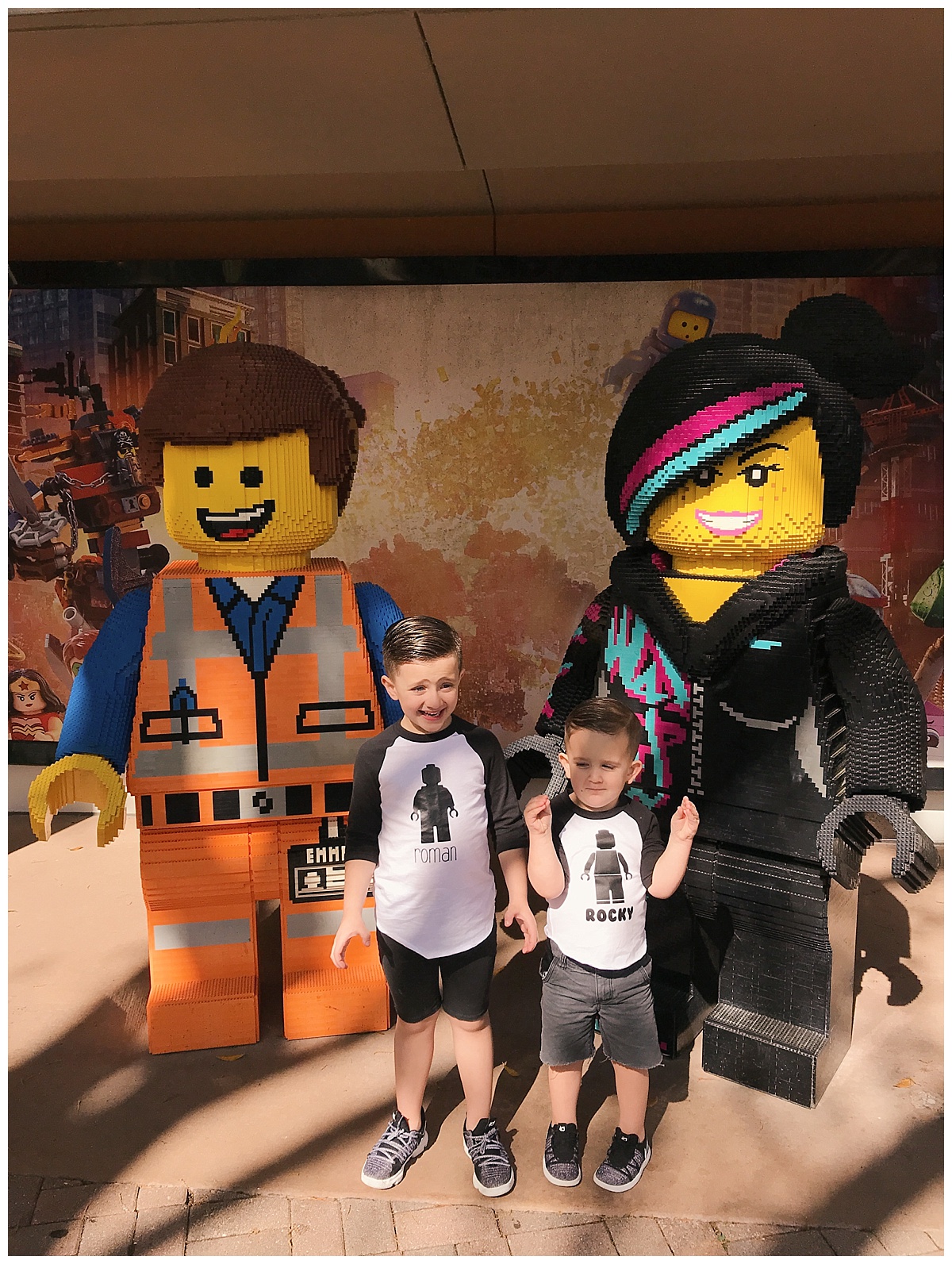 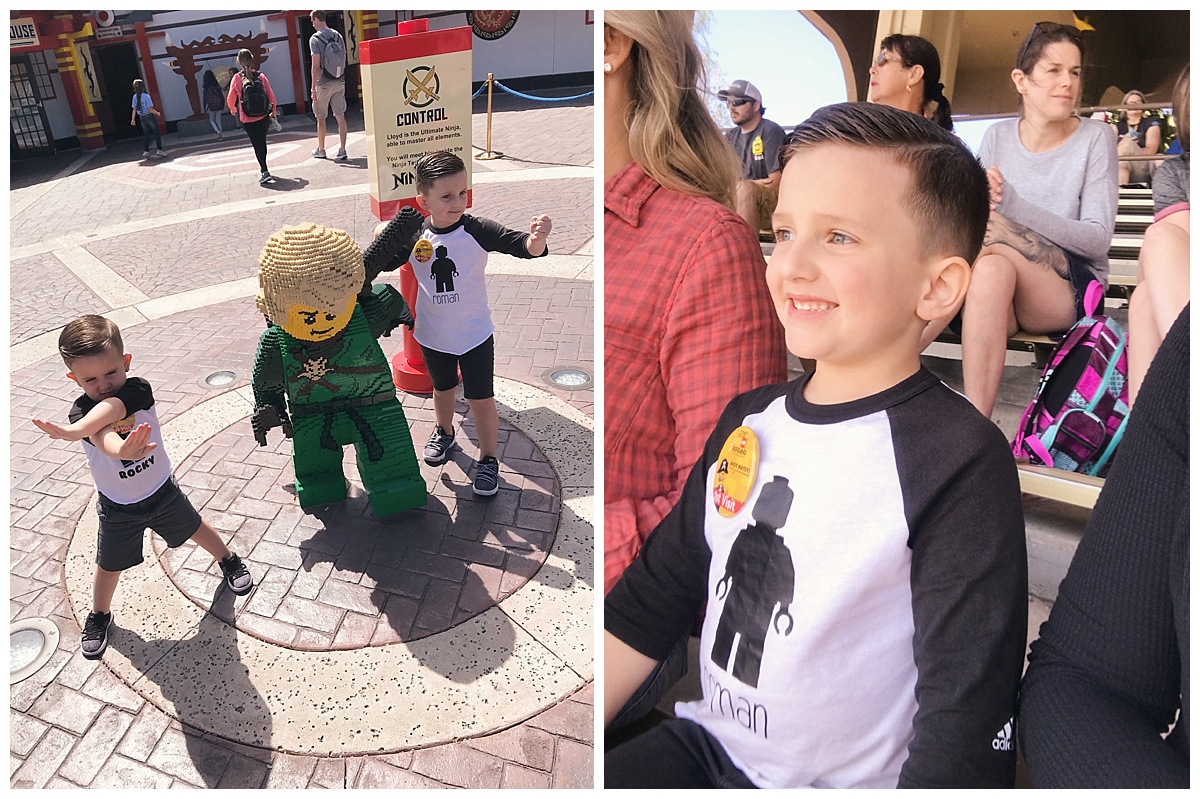 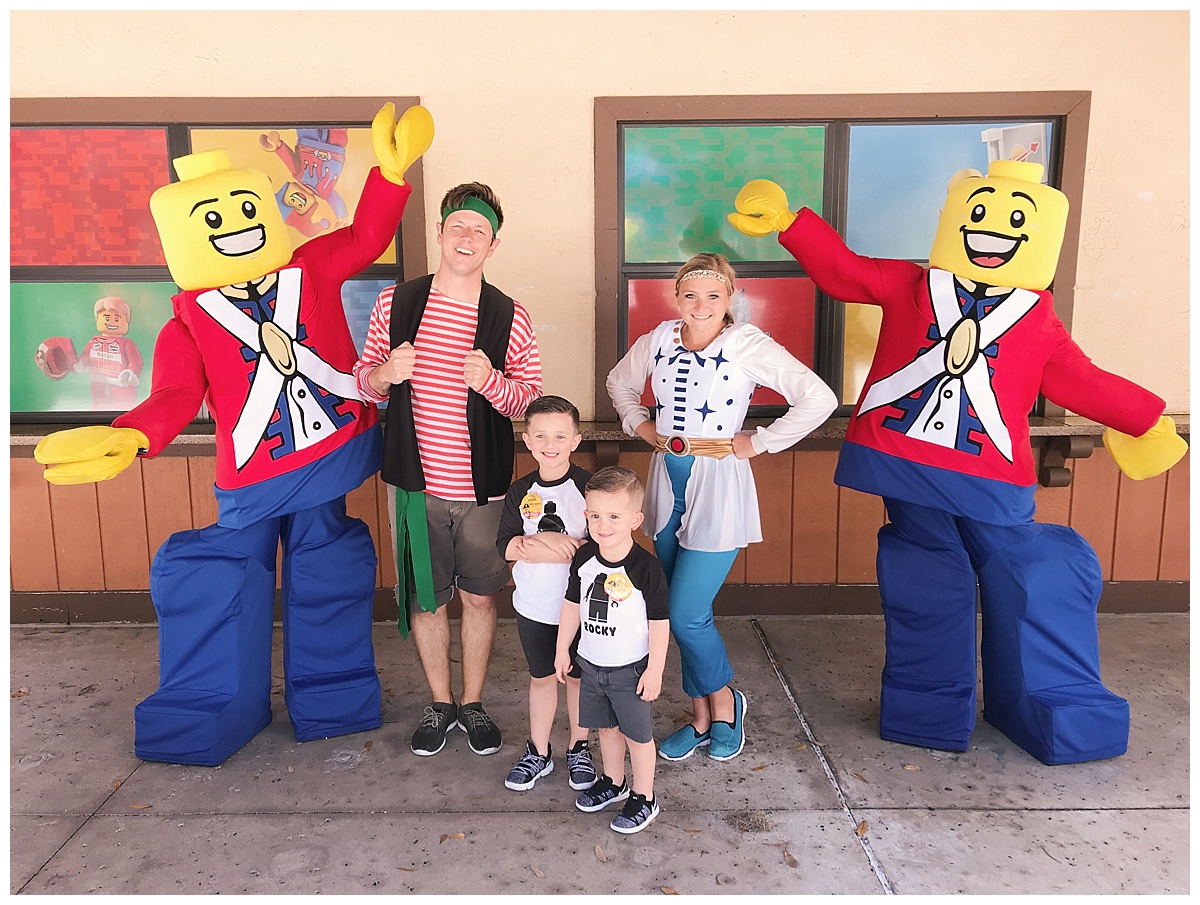 I had a few of you ask me, “Would girls enjoy Legoland too?”. This one is a little harder for me to answer, since I clearly have boys. Not to mention, Legos are hands-down my boys’ favorite toys. So they were in heaven. But I do think girls would have a great time too. There were definitely thousands of girls there and they all looked like they were having a blast to me.

What I really liked about it, was how they portrayed the girl lego characters at the park. They weren’t princesses (not that there’s anything wrong with that), they were warriors. They were all fighting right along side with the boys characters and had equal “powers” or abilities. They had a big water show (one of the boys favorite parts) and the girl character is the hero in the show who ends up saving everyone in the end. I just thought it was cool how strong and equal girls were portrayed throughout the park. 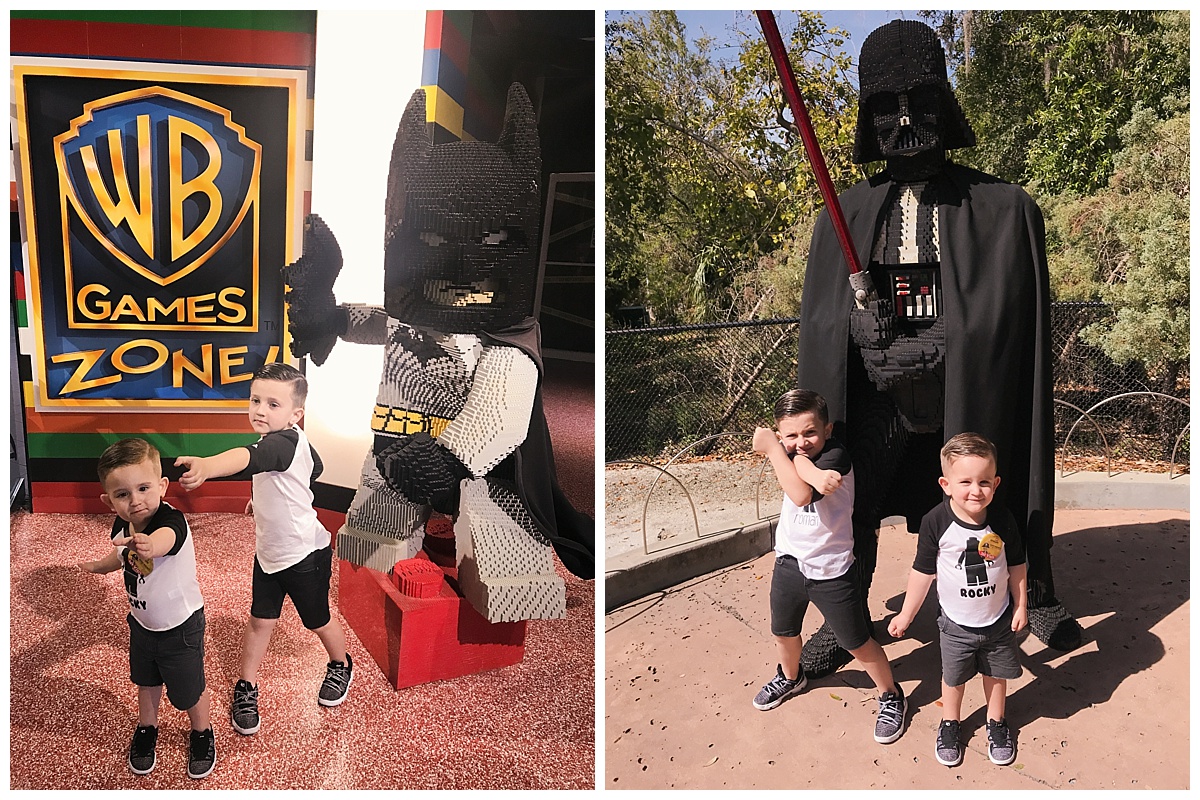 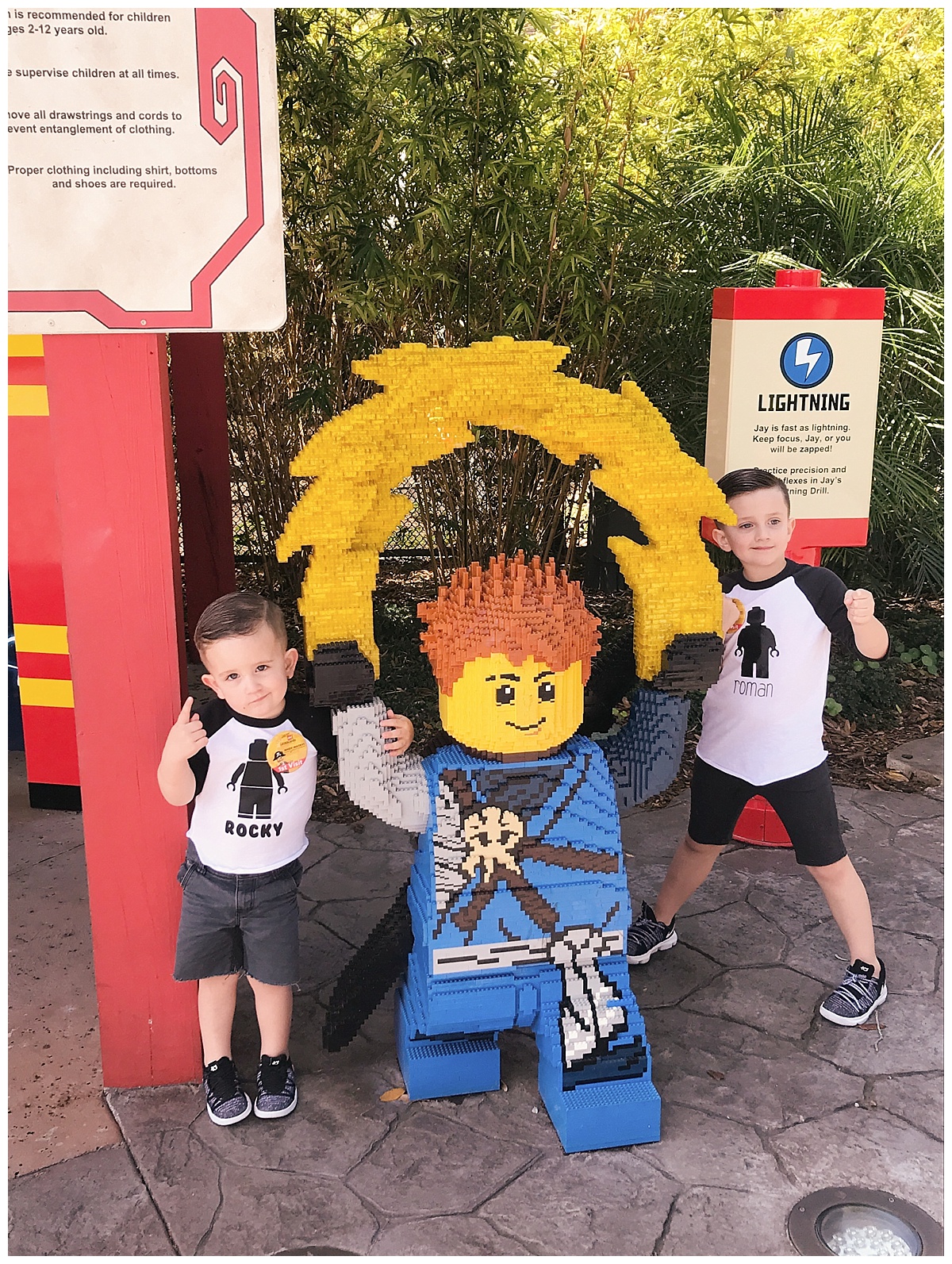 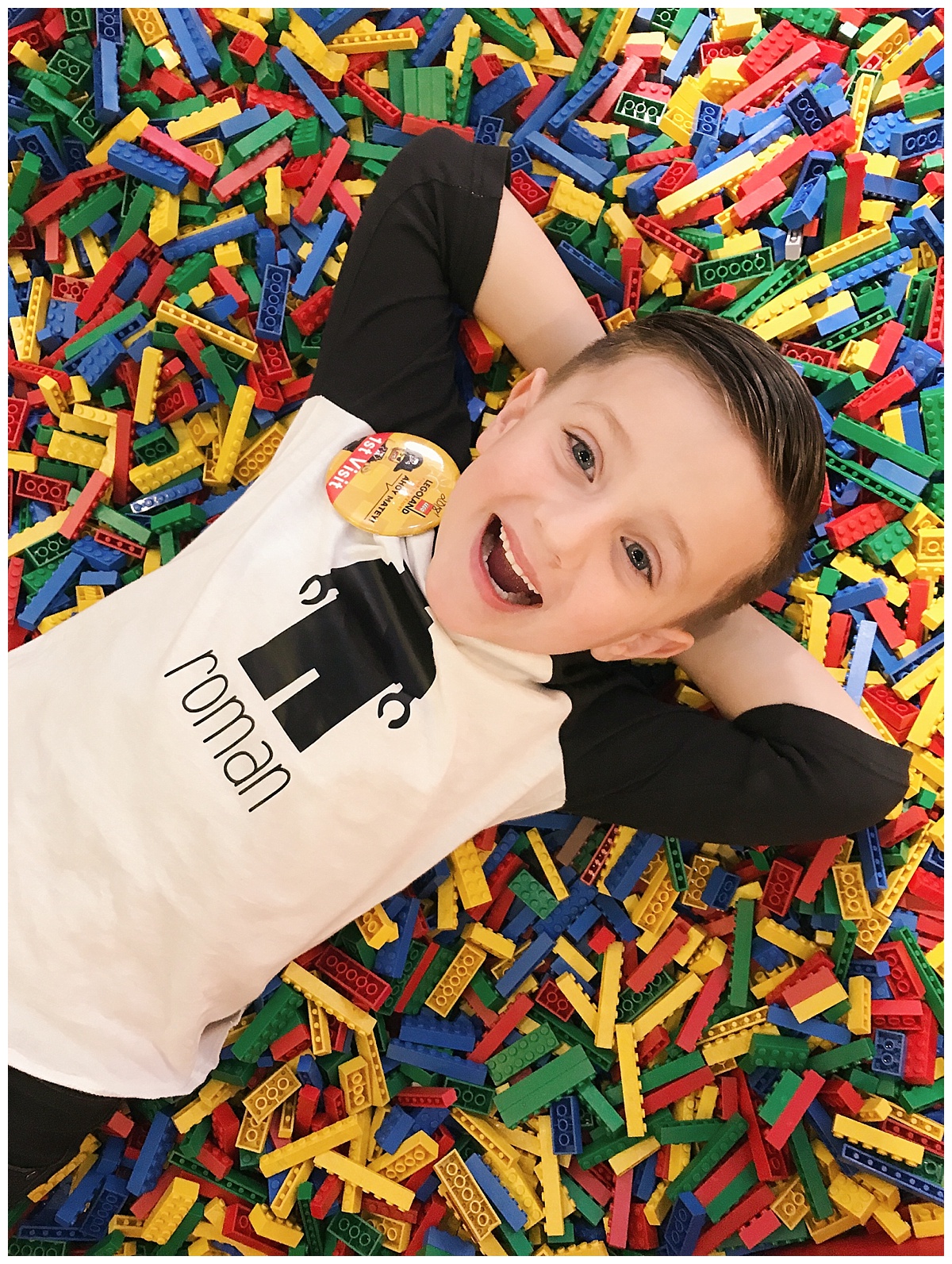 This is another thing that really surprised me about the park, and that I think sets it apart from other theme parks. Almost everything is interactive. It’s definitely not like Disney where you kind of sit, and ride the rides and look at everything around you (they have a few like that). They have rock climbing walls, games to test out your reflexes, games that test out your aim, rides you have to pull yourself up and rides where you have to make yourself spin. You drive your own boats, your own races cars and even your own firetrucks (while shooting a hose to put out “fires”). They had stations where you could build race cars and race them on a track, build planes and make them “fly”, and even build “virtual lego fish” (one of their favorite stops) and watch your creation appear on the movie theater screen.

There were plenty of rides for kids of all ages. We obviously stuck to the ones designed for the younger crowd, but they had rollarcoasters for the older kids too.

I should mention that they have a full waterpark at Legoland as well. I didn’t realize it was seasonal, so it hadn’t opened for the year yet when we were there (we missed it by 4 days :/). 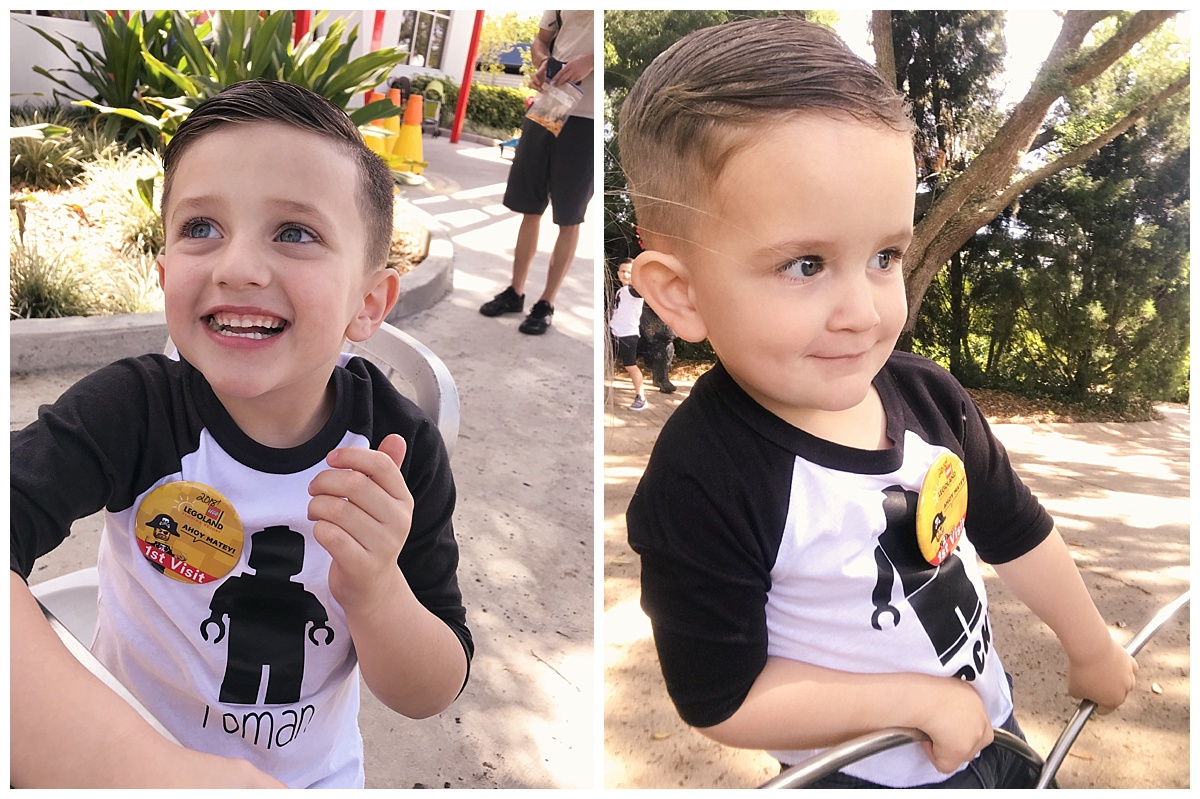 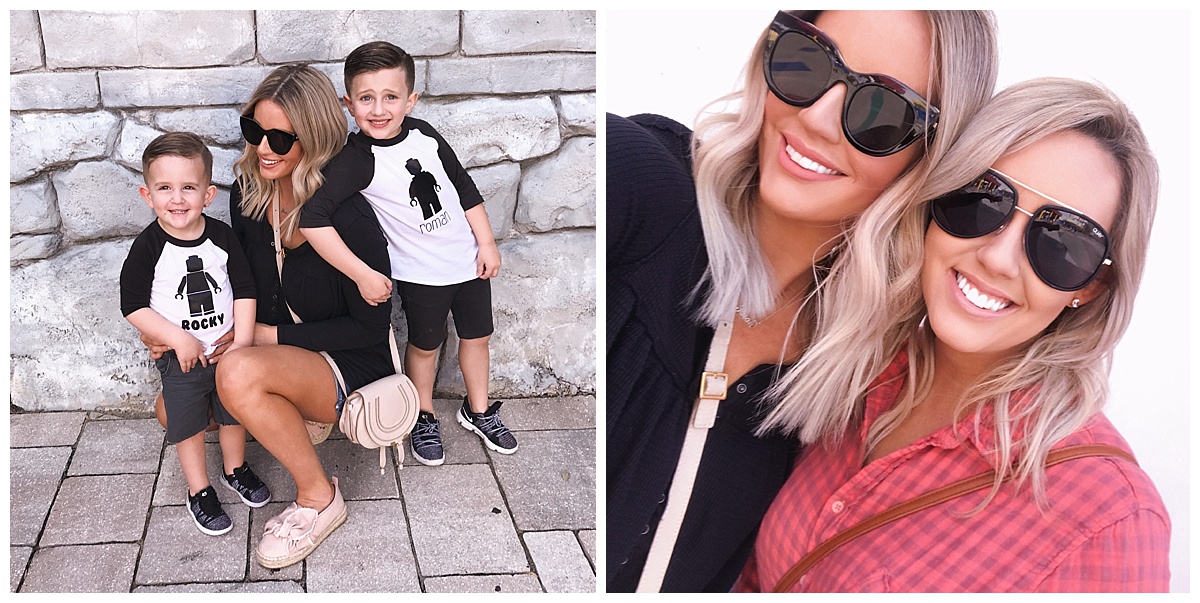 I was so happy my sister Laura got to come with us. She is like a second Mom to my boys and always helps me so much whenever Kent is gone! Love her to death. 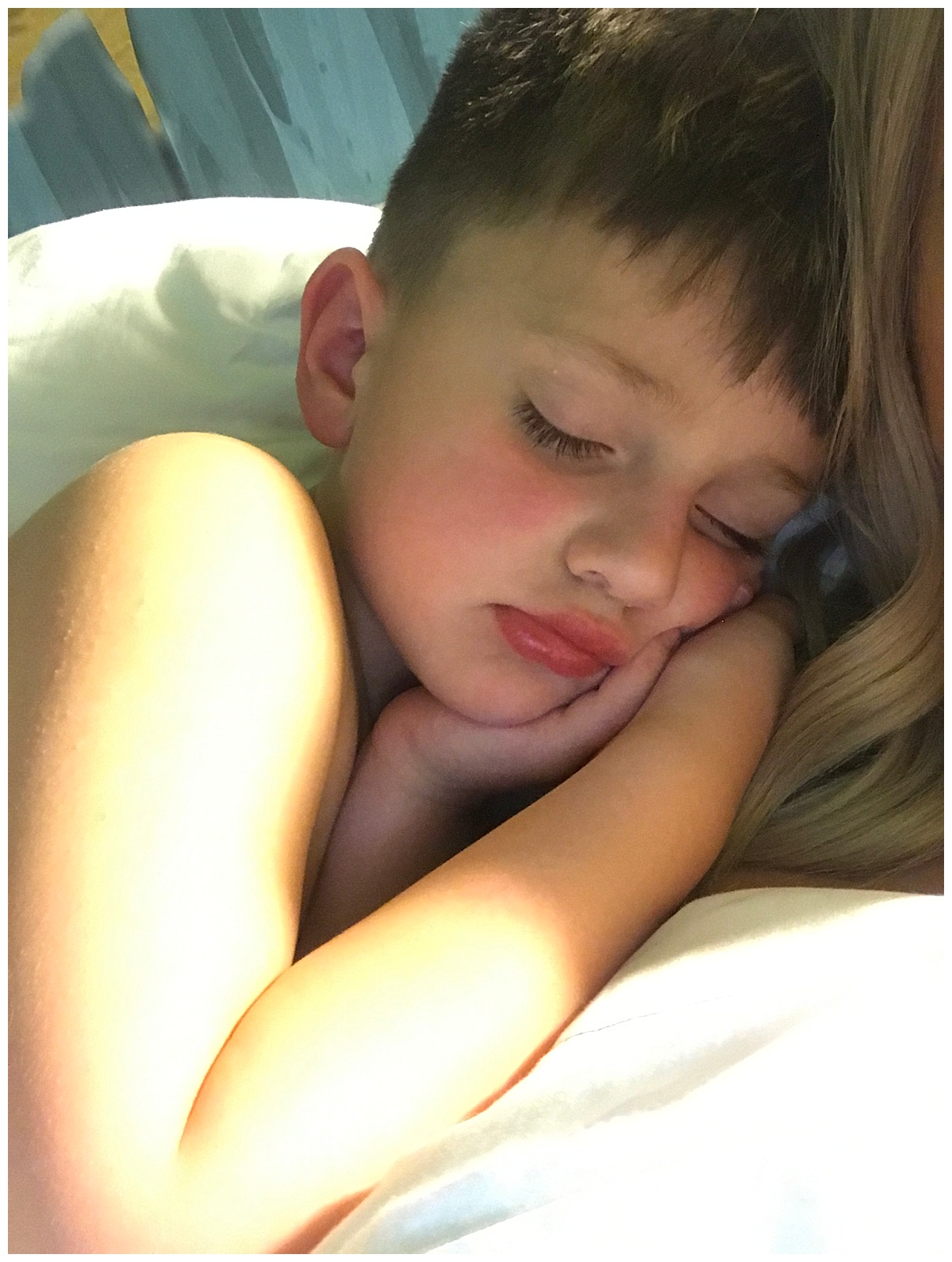 All that interactive stuff clearly wore this guy out. We had such a wonderful time at Legoland and the boys are already trying to convince me that we have to go back because Daddy didn’t get to see everything :). A huge thank you to Legoland for helping me make these wonderful memories with my sweet boys.

Let me know if you have any questions about Legoland! I’ll try to answer them in the comments below!

2 responses to “My 5 Favorite things about Legoland”